Please enter a valid email.
Thank you for subscribing.

What is a survey?

A survey is a research method used for collecting data from a predefined group of respondents to gain information and insights into various topics of interest.

Surveys have been running for a long time. Business owners that want to understand how the product or service is doing turn to surveys. Methods of sending out surveys include using paper forms and sending emails with an online digital survey. Based on the survey responses, they will measure the result which can be used to improve the products or services.

Email is one of the channels in which you can send out surveys, and is something that has been widely adopted by many businesses. Surveys through email is a method with low investment and high productivity that is used for sending NPS surveys. For these reasons, business owners send out emails to customers for product feedback.

However, there are significant draw back to email surveys, including:

What is a SMS Survey

SMS survey is the new type of survey. Everyone texts, so you might as well send a text survey.

So, when you send surveys via SMS, people are quicker to respond and you are more likely to receive more survey responses.

SMS Survey is part of the WikiPro echo system, which is another toolset that business owners can use to run their businesses.

NPS survey is the most popular survey system, with the NPS survey score ranging from 0 to 10: 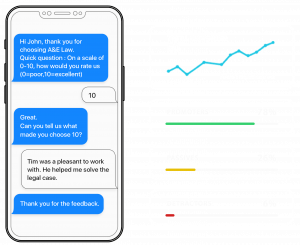 SMS surveys can be sent out during part of a SMS conversation with customers. This can also be sent out after certain events such as when payment is made, or a review is received. As a business owner, you can send out surveys at the right time in the right place. WikiPro makes sending SMS surveys easily.

There are several advantages to SMS surveys:

SMS surveys can be expensive in other platform providers comparing with email survey. This problem is solved with WikiPro, as the feature is covered in the plan. You no longer need to pay for another provider just for SMS surveys. Further, WikiPro has many other useful features to help you grow your business. It is an All-in-one business text platform.

Please enter a valid email.
Thank you for subscribing.